Unforgiving Years – a very suitable title for a novel that is reflecting the lives of the protagonists of Victor Serge’s posthumously published book about a group of life-long revolutionaries that have broken with the Communist Party after the show trials of the years 1936/37 in Moscow and the great purges in the Soviet Union, followed by the Ribbentrop-Molotov pact between Nazi Germany and the Soviet Union.

D – like all Comintern agents he is using several names and passports – has sent his “letter of resignation” to the service, a step that can result in any moment in retribution, i.e. assassination by one of the services loyal agents. Defectors are considered as traitors and have to be eliminated, in pre-War Paris where the novel starts like in any place of the world where Stalin’s long arm is reaching.

The novel consists of four sections, which are like large panels of a painting that shows the ideological, physical and personal devastations of these Unforgiving Years. In the first part, D is preparing his and his partner Noemi’s escape to the New World; the atmosphere is that of growing paranoia: both fear for very good reasons that a killer commando is after them and they are using all stratagems of conspiracy to stay safe. D tries to convince Daria, a close friend and fellow revolutionary whom he knows a long time (and was once in love with) to join them, but to no avail. Daria has made up her mind to go back to the Soviet Union.

In part Two, we are following Daria’s fate in the steppe of Kazakhstan and during the blockade of Leningrad. In part Three, she is on a dangerous mission behing enemy lines in a bombed-out German city during the last days of the war. These parts are full with some of the most impressive pages I have read about WWII; characters like the young officer Klim, the cripple Franz or the girl Brigitte and her fate leave a very strong impression on the reader. In the last part, Daria finally defects too and is joining D and Noemi – they have established themselves as small farmers in a remote part of Mexico – hoping that they have finally escaped the wrath of Stalin and the tentacles of his secret army of agents and killerati.

It is interesting to compare Serge’s novel with a few others written by so-called renegades; authors that were not only “fellow-travelers” of communism but that participated actively as Comintern agents or in other official or secret function in the fight for the revolution (or for Stalin), and that grew more and more disappointed after the trials and the pact with the devil Nazism. Unforgiving Years, Like a Tear in the Ocean (by Manes Sperber), The Great Crusade (by Gustav Regler), Darkness at Noon (by Arthur Koestler), and I could mention also many other works by Silone, Spender, Malraux, Orwell and others – they all have a central character that turns after a long inner fight from a convinced communist and revolutionary into a renegade, a person that objects to brutal and inhumane Stalinist ideology.

Contrary to the other mentioned authors, Serge was a life-long activist and a revolutionary by birth so to say. He was born into a Russian family of emigrants in Brussels – a distant relative was the explosives expert of the anarchist group that assassinated Czar Alexander II -, got involved in the activities of an anarchist group (probably the first one to use cars as escape vehicles during their bank robberies), served some time in prison and went shortly after the October Revolution to the Soviet Union were he became a part of the so-called “Left Opposition”. The later part of his life resembles a lot that of the novel’s main character,

Against all odds, this is also a novel of hope. D is expressing it after Daria arrives at his farm in Mexico and finds him changed and more calm, even philosophical:

“Every bit of basalt has its crown of greenery and flowers sprung from lifeless aridity. It’s a miracle of resurrection, like when the snows melt in our cold countries… For months there was nothing to see but a dried-up desert; who could guess that beneath the calcinated ground, millions of invincible seeds were concealed, ready to germinate. We observe that he true power is not that of darkness, or barrenness, but of life. All that exists cries, whispers, or sings that we must never despair, for true death does not exist.”

For me, Unforgiving Years is first of all a novel about the conscience and responsibility of the individual. Quite in the beginning, D – who is also the narrator of this part – says something that reflects perfectly the author’s opinion of that question, I suppose. And I think it is worth it to quote it in detail:

“What is “conscience”? A residue of beliefs inculcated in us from the time of primitive taboos until today’s mass press? Psychologists have come up with an appropriate term for these imprints deep within us: the superego, they say. I have nothing left to invoke but conscience, and I don’t even know what it is. I feel an ineffectual protest surging up from a deep and unknown part of me to challenge destructive expediency, power, the whole of material reality, and in the name of what? Inner enlightenment? I’m behaving almost like a believer. I cannot do otherwise: Luther’s words. Except that the German visionary who flung his inkwell at the devil went on to add, “God help me!” What will come to help me?”

From his memoirs which I had read long ago, I knew that Serge was an interesting author. Judging from Unforgiving Years it seems that he was even a very accomplished novelist who is still to discover; the very informative preface of the translator explains us that a recent biography on Serge wants to make us believe that “writing, for Serge, was something to do only when he was unable to fight.” (Susan Weissman, The Course Is Set On Hope, Verso 2002). I find this opinion wrong and the biographer’s decision to reduce Serge to anti-Stalinist fighter and propagandist only diminishes this extraordinary novelist without reason.

In a perfect world, the works of Serge and other writers who tried to open the world’s eyes to see the ugly truth about Stalinism, would be read far more widespread – and the works of those authors who started their careers as GPU henchmen that organised the assassination of renegades and ended up as Stalin or Nobel Prize winners would be, where they belong…but, as we all know, the Pablo Neruda industry is still blooming, whereas Serge is still virtually unknown to a big part of the reading public.

Thanks to New York Review Books, at least several of Serge’s books are available in English and we readers can do him justice: Memoirs of a Revolutionary, Midnight in the Century, Conquered City, The Case of Comrade Tulayev, and Unforgiving Years, a masterpiece that I can recommend strongly. 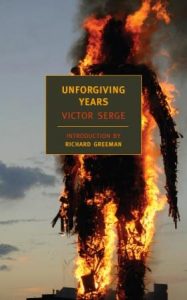