It is a tradition already: November is the time to read German literature! For the seventh time, Caroline from Beauty Is A Sleeping Cat and Lizzy from Lizzy’s Literary Life host the German Literature Month again, and I will be glad to join again!

As for my reading and reviewing plans: I will keep that for myself in the moment. Better not to promise too much…

Are you joining too? That would be great! Over the years, this event has developed into probably the biggest joint event in the book blogging community, and I am looking forward to it with great curiosity again!

Penguin’s Little Black Classics Series introduced me to number of authors I hadn’t read before; among them Edith Wharton – admittedly a rather embarrassing omission from my reading list until now. The Reckoning, a small booklet that contains apart from the story of the same name only one more piece, Wharton’s first ever published story Mrs Manstey’s View.

Mrs Manstey’s View appeared 1891 and marked the beginning of the career of one of the most important American author’s of the first half of the 20th century, and although Wharton was later very critical regarding her early stories – most of them are not reprinted in her Collected Stories -, it is of course very interesting to get a first-hand impression of her writing before the novels that made her famous, following the publication of The House of Mirth.

Mrs Manstey’s View is one of the most devastating portraits of lonely widowhood I have read. When the view from the window of her rented room in a boarding house to which the title is referring and which is her only joy is threatened by the construction of an extension building, the elderly Mrs Manstey, practically forgotten by her daughter who lives far away and considered as mad by her few social contacts because of her obsession about her view and her inadequate attempts to stop the construction work that will destroy this view for good, comes up with a last desperate idea to put a halt to the extension plans, an idea with catastrophic consequences…

While the language and the setting of the story are rather conventional, and while the story is too short to get a really deep inside into the character and psychology of the protagonist, this piece works nevertheless well as a short story, and although the more mature author found certain flaws in her early stories, it is already with this first work that appeared in print that the author made a mark in literary circles in 1891, the date of the first publication.

The Reckoning, first published in 1911, shows Wharton already at the height of her powers as an author. It is considerably longer than the first story, and is also more elaborated in more than one respect.

The story’s main character, Julia Westall, is married to her second husband Clement since ten years. Her marriage can be considered a “modern” one: in a time when divorce was – especially for a woman – a social stigma, Julia has left her first rich husband without regrets. Too socially awkward, too “impossible” was John Arment, and the friends of the Westall’s, among them the upper-class Van Sideren’s consider this, together with Julia’s obvious disinterestedness (her second husband is moving slowly upward the social ladder, but is not a really wealthy man) as something that makes an otherwise in such circles scandalous divorce acceptable. When Westall, a verbal advocate of “modern” ideas also regarding the institution of marriage, takes a serious interest in the daughter of the Van Sideren’s, Julia finds herself from one moment to the next in a situation where her orderly and seemingly happy life collapses. The surprising climax of the story sees Julia in the home of her first husband. But I will not reveal more details here…

With its six more elaborated characters, and especially with a heroine that has considerably more depth than the protagonist of the first story, The Reckoning is a really fascinating story. It is also a strong, almost brutal analysis of the power balance between men and women in the society in which Wharton was living. Once a husband decided to discard his wife, it meant for her usually that she lost everything, including her position in society (which considered women mainly as an adornment of their husbands). What is additionally tough for Julia is the fact that she doesn’t exactly understand why it happens, the marriage having been over ten years a happy one (at least by superficial standards), and her visit at her first husband is acknowledging the fact that now she knows that he also didn’t understand what happened when she left him ten years ago…

Altogether, The Reckoning is a remarkably fresh story that resonates long in the mind of the reader.

I am glad that I started my personal Edith Wharton Reading Challenge with this teaser; now I am curious to read not only her most accomplished novels but also her Collected Stories! 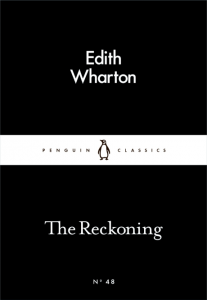 You can follow this blog now also on Bloglovin’ – just saying…