Since I am right now living and working in the Republic of Moldova, it will come probably not as a surprise to you, dear readers, when I am trying to get my hands on any books written by Moldovan authors that are translated in a language that I am able to read. There are indeed a few quite interesting authors whose translated books I will feature here in the future.

Today I am writing a few lines about a rather humorous book by the British comedian Tony Hawks: Playing the Moldovans at Tennis. At the beginning is an eccentric wager: Tony is betting with a friend (after they watched the Moldovan football team in TV losing against England) that he can beat every member of the Moldovan National team in tennis. (It should be mentioned that a short time before his Moldovan adventure he won a bet that included his traveling around Ireland – with a fridge!)

“All I knew about Moldova was the names of eleven men printed on the inside back page of my newspaper. None of them sounded to me sounded like they were any good at tennis…”

So, the bizarre quest is simply: tracking down the country’s football team, challenging them one by one to play tennis with him – and win! (Maybe I should mention that the loser of the bet is supposed to sing the Moldovan National anthem on a crowded street in London – with his pants down…)

What follows is the hilarious report of Tony’s adventures mainly in Moldova, with a visit in Northern Ireland (where the football team has a match that would give Tony the opportunity to challenge some players he hadn’t met yet.) and an exciting trip to Nazareth where things seem to go wrong for Tony…

The guiding principle of the book, the tracking down of eleven football players reminded me of course a bit of The Twelve Chairs. There is plenty of action, unexpected turns of fate, meetings with the Moldovan underworld, gypsies, and every day challenges such as power cuts, huge manholes in the almost unlit streets of the capital Chisinau, adventures in the public transport, but also encounters with plenty of helpful people, especially his guest family with which Tony created a bond of friendship for life.

A good part of the humour of the book is based on the clash of culture between an over-optimistic Englishman and a local population who seem to be a bit reserved and not particularly surprised about Tony’s plan. In a country where almost everyone is focused on surviving the next day, that is probably not surprising. (The book was published in 2000, but things have not changed a lot and Moldova is still the poorest country in Europe.)

Usually, I am a bit reserved regarding the genre “Humorous Travel Books”. Too frequently, the humour in the book is of a condescending and disrespectful nature; the content of this kind of books can be described as “Foreigner from a wealthy Western country travels to a poor country about which he doesn’t know anything and doesn’t want to learn anything, with the sole purpose to poke fun at the hapless and primitive natives, in order to entertain other prejudiced and obnoxious foreigners from wealthy Western countries.” The travel prose of AA Gill and some other hacks belongs to that category. I don’t like that at all.

Fortunately, Tony Hawks is a different kind of person. His humour is self-depreciating, and he is genuinely interested in getting to know and understand the Moldovans. He is even questioning if he is doing the right thing with his bizarre adventure, which seems to him rather frivolous as time is passing, considering the living conditions of everyone around him.

Of course I am not telling you here if Tony was successful and was really able to beat all players. You have to read it by yourself, and I can assure you, it is a very entertaining book. And since there not many books about Moldova, it is still a must-read for anyone who travels there.

50% of the royalties of this book go into a fund that supports a local children’s health centre in Chisinau, the Tony Hawks Centre. Tony is still traveling regularly to Moldova and is doing additional fundraising for the good cause. If you want to learn more about the Tony Hawks Centre, or about Voinicel, another NGO in Chisinau that supports children with special needs and their parents, visit their respective websites. And maybe you consider also if you can make a donation – it is for a good cause! 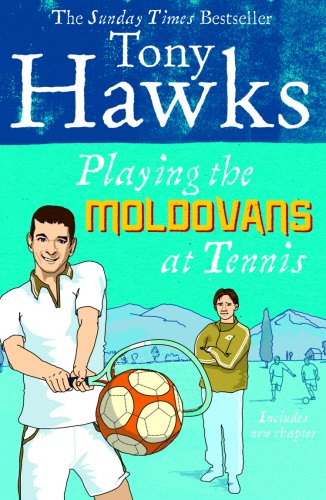