The narrator of this story, a man with a rich imagination, and prone to both bouts of migraine and frequent visions is walking up and down his study for hours. It is New Year’s Eve of 1799, the last day of the 18th century. The writer waits for the return of his wife who is out for a visit to a sick friend, promising that she will be back “still in this century.”

The last day of a year, and even more so the last day of a century is reason for contemplation, but our narrator has again a terrible migraine attack – and suddenly it happens:

after closing his eyes for a while and upon reopening them again he realizes that there is a group of five people, among them a little child in his room and he has no idea who they are or how they entered. The group’s appearance is rather odd, not so much frightening and a dialogue between the narrator and the group is developing that covers most of the story. This dialogue deals mainly with the prospectives for the future. The tone, partly serious, partly humorous keeps a kind of balance that makes us readers wonder what the author is up to. One of the narrator’s guests gets more and more excited and develops a truly apocalyptic scenario for the future that is the climax of this story:

“There will one day be a last man – he will stand on a mountain under the Equator, and look down upon the waters which welter over the wide earth – firmly from the poles gleams upward the unchangeable ice – the moon and the sun hang broad and bloody over the little earth, like two eyes full of hate. For the earth’s spiral orbit has brought it nearer and nearer to the sun, and the moon’s spiral has enlarged the face with which it looks ever steadfastly toward our planet, and their strong attraction caused the oceans to roll together round the Equator – and then the whole atmosphere with its vapors rushes up from the poles after the water, and still as the attraction increases, a frightful flood of electric fluid pours and swells over all. The clouds, piled up in mountain-towers stream quickly across the sky, and plunge into the sea, and then rush upward again, while the lightning  on burning wings flashes from Heaven to the Ocean and cleaves them asunder. Look up to the Heaven, thou last man! All on thy earth has disappeared – all its rivers have been swallowed up in its sea.” (translation by J.F.C., The Western Messenger, November 1838)

Believing that midnight is approaching, the uninvited guests are leaving – but it turns out that when the authors wife comes home from her visit it is one hour before midnight. Remarking her husband’s mood, the wife sings and plays on the piano one of his favourite tunes and the usual order of things is re-established. The vision was most probably something only imagined by her husband.

This short story by Jean Paul Friedrich Richter – known in Germany as Jean Paul only – Die wunderbare Gesellschaft in der Neujahrsnacht (The strange company at New Year’s Eve) is rather typical for this remarkable and not well-known author who wrote in the traditions of Swift and Laurence Sterne and who had a tremendous influence on authors like Hoffmann, de Quincey (who wrote an essay about him) or Arno Schmidt and among the contemporary German authors I could mention Walter Kappacher and Ludwig Harig (who was by coincidence my teacher when I was a first grader) as examples of novelists that are writing in Jean Paul’s tradition.

The story from which I quoted is witty, well-written and despite the bleak quote very entertaining. And it is according to some SF experts most probably the first literary Dying Earth scenario ever published – and thus a kind of predecessor of a certain category of the Science Fiction genre.

Jean Paul lived most of his life in pre-Wagner Bayreuth, but he paid also longer visits to Weimar (Goethe and Schiller were rather distanced, partly because of literary reasons, partly because of the fact that Jean Paul, then a bachelor had several relationships with women which were considered a scandal; Wieland and Herder on the contrary liked him very much), and to Berlin – here he made friends with the Schlegel brothers, Schleiermacher, Fichte, and other important intellectuals.

Jean Paul is a great master of the German language; and he is also a master of the digression – his novels are usually very long because he is a true follower of Laurence Sterne here.

Who wants to discover this literary giant who was standing between Classicism and Romanticism can start with this rather short work that inspired also many famous illustrators (I have a beautiful edition with sketches by Alfred Kubin.). Unfortunately it seems that there is no collection of stories on the market that contains this story in English translation. Why, dear publishers?

A book I can heartily recommend for those with an interest in Jean Paul is Günter de Bruyn’s biography Das Leben des Jean Paul Friedrich Richter (The Life of Jean Paul Frederick Richter), a beautiful dedication by the novelist de Bruyn to his literary ancestor Jean Paul.  I fell a bit under the spell of Jean Paul after I had read this well-researched and brilliantly written book.

A translation of this book and a recent good edition of Jean Paul’s shorter works in English is missing – but who knows, maybe a publisher is already working on it. That would be a great pleasure! 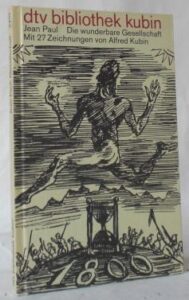 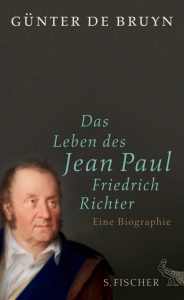