Romance, adventure, a heroic fight for freedom and independence against an army of brutal oppressors, a young couple that is re-united against all odds: this story has it all. No wonder that it was a kind of bestseller for generations in the author’s homeland. It offers entertainment and the heart-warming message that a fight for national independence against foreign rule can be successful in the end. But although this seems to be the message on the surface, there is a much deeper (and darker) hidden meaning in this story.

Jan Norris and Myga van Bergen are inseparable friends since their early youth and everybody expects them to be married one day. But the times are difficult. This is Holland in the late 16th century, the time of the Dutch Independence war against Spain. The couple is separated due to the circumstances and Jan is becoming a member of the so-called Watergeuzen, a group of rebels that is fighting the Spanish on the sea and that has a reputation of being particularly cunning, brave, and cruel.

Despite his young age, Jan is admitted as an officer on board of the “Black Gallery”, a mysterious ship that appears only at night and with whom the Watergeuzen have several spectacular successes against the Spanish fleet and fortresses. In the meantime, the beautiful Myga, now orphaned, is in serious trouble: the captain of the Spanish ship Andrea Doria falls hopelessly in love with her, and there is a plan to kidnap her. But Jan Norris gets by chance some information on the plot and rushes to protect his Myga…

I don’t want to give away the whole story here of course. But I think it is interesting to read Wilhelm Raabe’s The Black Gallery (Die schwarze Galeere) not only as an adventure and romance story.

Raabe, one of the great realistic authors of the 19th century (and today almost forgotten), proves with this early story not only that he knows how to entertain his readers with a colorful action and love story. He introduces also “gothic” elements like the Black Gallery (although based on a real ship it clearly reminds the reader of the Flying Dutchman) into the tale. And there is an interesting figure in this story which deserves particular mentioning: the experienced Spanish officer Jeronimo is a disillusioned old fighter who understands that this war is a useless effort: although the war is raging already since many years and too many soldiers and civilians have died, none of the parties has made any real progress…and for what all this bloodshed? Jeronimo is clearly a mouthpiece of the author in my opinion.

Raabe, deeply influenced by Schopenhauer’s pessimistic philosophy, was anything else but a warmonger and chauvinist. Even the fight for a good cause has in any case very bad consequences and affects the character of each involved person in a very negative way.

It is surprising that Raabe’s story has been read for such a long time as a kind of simple heroic story that supports the virtues of the fighter for a good cause, the national independence.

But it is so obvious that Raabe was far from the intention to write a piece to stir nationalistic feelings. His message is clearly that war brings out the worst in each person. Although in principle sympathetic with the Dutch freedom fighters, he also mentions their immense cruelty, and Jan, the loyal friend and lover sets also a very bad example for killing the already unconcious Spanish officer out of personal revenge: a murder, not a fair fight in battle. The worst is that there is a young generation without the longing for peace – because they don’t know what peace is. Unfortunately this is today true as ever in many places on this planet…

In my opinion, Wilhelm Raabe (1831-1910) is one of the greatest writers of the 19th century and this story is a good opportunity to discover this author. The Black Gallery is as far as I know available in English only in a collection of Sea Stories. A book with Raabe’s stories in English would be a commendable deed by any publisher. 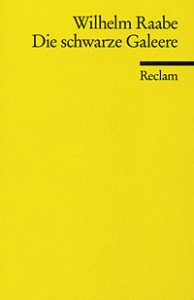