The Bulgarian Ministry of Culture in Sofia hosts an exhibition room that is very suitable for art exhibitions, and indeed it could be a good, central place to showcase artworks by various contemporary artists.

I remember that the last time I paid a visit to the premises, there was an exhibition with works of Vezhdi Razhidov, a sculptor and painter of modest talent. What annoyed me was not that such a – in my opinion – unremarkable artist was given exhibition space in the Ministry of Culture, but the fact that this artist is – the Bulgarian Minister of Culture himself. He uses this space obviously to promote himself and thus trying to increase the market value of his artworks by exhibiting in the Ministry that he seems to consider as his quasi-private property. That a Minister is using government resources or even premises of the government to promote his own business activities would cause a major scandal, and even investigations by the relevant authorities about misuse of taxpayers’ money in probably any other country; there can be no doubt that such a Minister could not remain in office after such a blatant show of disrespect of elementary rules of political integrity and misuse of governmental resources for private profit-oriented purposes. But there was no major protest, no investigation, no replacement of the Minister.

Some time later, the big opening exhibition of the expensively renovated former Museum of Foreign Art (now part of the National Gallery) took place. As I wrote in my blog post about this exhibition, there were quite a lot of major complaints to make about this exhibition. One of them was related to the fact, that the only living artist representing the period after 1989 in this exhibition was (with two of his works), the Minister of Culture, Mr. Vezhdi Razhidov. Again, the host used his governmental position to promote his artwork, in order to increase his market value. Again, there was no major protest, no investigation, no replacement of the Minister.

One of these days, I have been again accidentally passing by the Ministry of Culture. And what do I see? The windows of the exhibition room are decorated right now with three big posters that advertise three art exhibitions of works of Minister Razhidov. Again, the host used his governmental position to promote his artwork, in order to increase his market value. Again, there was no major protest, no investigation, no replacement of the Minister.

I guess these small but symptomatic observations give you an idea regarding the state of cultural policy in Bulgaria. 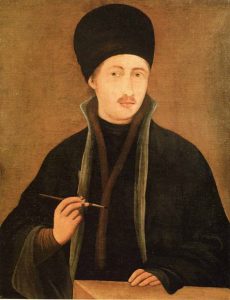 The Bulgarian Minister of Culture Vezhdi Razhidov awarded recently an important prize to the so-called historian Bozhidar Dimitrov, an ultra-nationalist propagandist and – according to renowned international historians – scientific crook and impostor with a past in some very dirty business.

Since when is stealing documents from the Vatican Library, manipulating Bulgarian history in the sense of a chauvinist, ultra-nationalist political agenda, and working decades as a snitch and informer for the Stalinist State Security a reason to be bestowed with the biggest honor in the field of Bulgarian culture, the order „Златен век“ (Golden Age)?

Bozhidar Dimitrov is not a historian but a “chalga historian” – he is known under this name among his colleagues internationally – and the name fits him perfectly.

Once again, Minister Razhidov is besmirching the dignity of all people working in the cultural sphere in Bulgaria and all cultured people there.