Usually, I am not very much interested in the lives of the authors I am reading. When you read a biography of a writer it frequently turns out that they were more or less like you and me, at least on the surface. What made them different and outstanding was their ability to create literature. As a private person, most of them seem not to have been very remarkable, and more frequently than not, they are described by those who knew them as rather self-centred, narcissistic, or unsupportable human beings. There are a few exceptions of course, writers that – if you had the opportunity – you would have liked to meet in real life, simply for being the extraordinary and/or truly good person they have obviously been. Montaigne or Lichtenberg come to mind, but also Chekhov.

Elif Batuman is of Turkish origin but grew up in an obviously wealthy upper middle class family in the U.S.. She fell in love with literature and more specifically with Russian literature at an early age. And when she took violin lessons later, her teacher was an enigmatic and somehow secretive Russian – this first Russian she met in real life left a mark on her. When she decided to study linguistics (in the vague hope to become a novelist later), she took up Russian lessons as well. And while linguistics proved to be a real disappointment, Russian language was not, although it took her a long time to learn it well.

When I started The Possessed, I had the expectation to read a book about Russian writers and literature. But it is first of all an autobiographical book by Elif Batuman on her intellectual coming-of-age. That was unexpected – I came across this book by chance in an antiquarian bookstore in Sofia, and since the good hard cover cost only about 5 Euro, I thought I give it a try. Despite my slight momentary disappointment (I had simply wrong expectations), I enjoyed this book very much because it is overall so well-written, funny, interesting, fresh. And it is also a travelogue, kind of.

Batuman describes her time in Stanford and her participation in some international conferences with a lot of (self-)irony and humor. How two well-known Babel scholars “give each other the finger” in a parking lot over a dispute regarding the last free parking space is hilarious. The Babel family (widow and two daughters of the great Isaac Babel) prove to be not easy to handle when they participate in an international conference to Babel’s honor. And also the Tolstoy conference in Jasnaya Polyana turns almost into a disaster because Aeroflot loses her luggage and she has to spend a week in her flip-flops, T-shirt and jeans – not because she is a “Tolstoyan” who prefers the most simple outfit, as most participants seem to assume. Also how she successfully collects travel grants on rather dubious scientific projects, or how the famous New Yorker magazine sends her to Sankt Petersburg without willing to pay her travel expenses, but expecting that she spends a night in the Ice Palace – a real palace made of ice, built according to an old design – these and other stories make for a very entertaining read.

On a more serious note, Batuman provides interesting background information on the writers and works she is covering: mainly Isaac Babel, Tolstoy, Dostoevsky, and Pushkin. I didn’t know Ivan Lazhechnikov before, but her extremely interesting chapter on The Ice House, his book published in 1835 makes me curious to read this work (Batuman makes excessive use of her New Yorker reportage in that chapter).

Another part of the book that I found extremely interesting, was the description of her time in Samarkand, Uzbekistan. While she studied Uzbek language and literature there, she gives very interesting insights into the history and everyday life of people in this now independent country with an ancient literature of high level (especially the works of Mir Ali Nevai, sometimes also referred to as Alisher Navoi).

As I mentioned, this is also an autobiographical work. The author is also the main character, and it describes her changing private life as well. Boyfriends come and go, also interests shift somehow, but the love for literature and the wish to write are the interests which give the authors’ intellectual journey such a strength and continuity.

Batuman mentions somewhere the fact that Tolstoy introduces in Anna Karenina many characters without a name, or he is using the same name (such as Andrey) several times. That can be a bit confusing when you don’t read Anna Karenina very focused. As if to make an allusion to Tolstoy, she is introducing a certain Matej, a co-student and friend from Croatia in an early chapter. In a much later chapter, a Matej, co-student from Croatia is introduced to the reader again, this time he is the boyfriend of the author. I suppose this is the same person, but then why to introduce him twice? The second time it was very confusing because unless it is an oversight by the author (and the editor), it doesn’t make sense to introduce him again. (I suppose that the two chapters were published before the book edition separately in some journal, and later it was forgotten to remove the double introduction of this person) Or did I miss something completely? I am still confused, and that distracted me a bit from the beautiful prose Batuman writes.

As for her literary likes: they are excellent, and I share most of them. Isaac Babel is one of my biggest heroes in the literary world. And as everyone, she has her idiosyncrasies, which is fine. Still, I would have liked to understand what exactly is so boring about Orhan Pamuk. She doesn’t explain it.

Abdulla Qodiry, the author of Past Days, the most important Uzbek novel of the 20th century might be a great author, world class – but when she writes that he is writing on a thousand times higher level than Cechov, I simply have to believe it as a reader because she doesn’t explain what’s so terrible about Cechov’s writing, or so great about Qodiry’s abilities as an author. (I love Cechov very much and simply cannot believe her.)

The same goes for her rejection of any literature from the “periphery” – come on, you just told us how great Abdulla Qodiry is – and doesn’t he come exactly from the periphery: Uzbekistan?. Or her strong dislike of Creative Writing courses. What exactly is so terrible about them? I didn’t get it – beside the fact that the weather was better in California than in New England where the course she fled from was to take place.

My point here is the following: these opinions – which I don’t share – are all fine, but when the author is not explaining me (or at least not in a way that a reader would consider somehow enlightening or satisfactory) WHY she has these opinions, I get the impression that these are just resentments. Probably it’s more, but it is a pity she didn’t put more effort in explaining her strong opinions on (some) literature.

Another aspect of the book that I found a bit difficult was the way, scholars or experts that teach outside Stanford are described: the Babel scholar that teaches in Tashkent and makes his own research in Odessa and Moscow is considered a moron: the whole truth is in the American archives, and who wastes his time to interview people who knew Babel or find documents in former Soviet archives is simply a poor idiot. The same goes for the Babel family, three monsters, driven by paranoia and maliciousness. (By the way, Babel was shot on the 27 January 1940, not on the 26th. Who is so strict in his judgement of others should have his facts correct.)

And I could have also done without the anecdote about the poor old Tolstoy scholar, his “accident”, and the resulting bad smelling underwear – Batuman doesn’t give his name, but I am sure for insiders he is easy to identify. Why to embarrass a person by dwelling on his incontinence, a medical condition, not a character deficit? That put me a bit off.

I see my complaints about the book are rather longish. But don’t be deceived: this is despite my ranting in the last paragraphs a book I enjoyed, partly travelogue, partly autobiography, partly literature study. It’s the first book of this author, and I will gladly read what she publishes in the future. It’s just the fact that with a bit of editing, this would have been really a masterpiece. As it is now, it is still a good book.

And Babel and King Kong? There is an almost uncanny connection between the great writer from Odessa and the famous 1933 movie. I am not going to spoil the fun of future readers, so if you want to know about it: read this book. 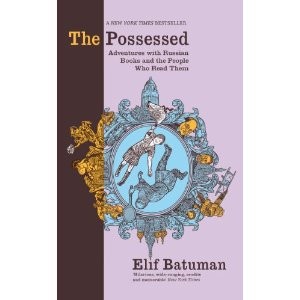