Very little is known about the life of Walther von der Vogelweide, the most remarkable German poet before Goethe; neither the birthplace of this troubadour (Minnesinger) – probably in Austria, but maybe also in Northern Italy –  nor his exact years of birth (ca. 1170) and death (ca. 1230) are known. He was obviously the loyal servant of a bishop and was rewarded with an amount of money sufficient for an expensive fur coat once – the only official mentioning of his name in the records and proof of his comparatively elevated social status.

Walther’s poetry is written in Middle High German (Mittelhochdeutsch) which is surprisingly intelligible to modern-day native speakers – especially when you are from Southern Germany or Austria. It covers a number of topics and genres but his love poetry features most prominently. While a big part of it worships an aristocratic, married and therefore inaccessible frouwe from a distance, Walther’s poetry also covers other, to us modern readers more familiar grounds that make his charming poems still very fresh and appealing until this day. I am therefore recommending his works to anyone with a genuine interest in German literature.

In the following Taglied the poet lends his voice to a girl after her spending a night with her lover (most probably a man of higher social status).

Under the linden tree

Under the linden tree
on the heather,
where we shared a bed
there you may find
lovely together
broken flowers and grass.
Near a forest in a vale,
tandaradei,
beautifully sang the nightingale.

I came to meet him
at the green:
there was my beloved come before.
Such was I received
(Queen of Heaven!)
that I am blessed for evermore.
Did he kiss me?
Perhaps a thousand times and some:
tandaradei,
see how red my mouth has become.

There he had been making
for luxury
a bed from every kind of flower.
It sets to laughing
delightedly
whoever comes upon that bower;
by the roses well one may,
tandaradei,
mark the spot my head once lay.

If someone knew
he lay with me
(may God forbid!), for shame I’d die.
What did he do?
may none but he
ever be sure of that — and I,
and one tiny bird,
tandaradei,
that may well not say a word. 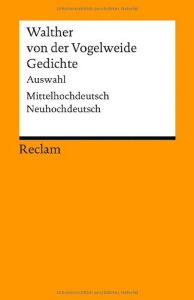 For those who read German, I can recommend the edition of Walther’s poetry in the legendary Reclam Universal Edition (bi-lingual, High German/Middle High German), Stuttgart 2013 (“Gedichte – Auswahl”); there is an English edition “Selected Poems of Walther von der Vogelweide: The Minnesinger”, translated by Walter Alison Phillips in 1896 and republished by Cornell University Library in 2009; another more modern translation of the poem in English can be found in Raymond Oliver’s “To Be Plain: Translations from Greek, Latin, French, and German”, Robert L. Barth, 1981