16 June 1957 – a rainy day but always to be remembered as a black day in the lives of all families in a small town at Mount Lebanon, the stronghold of the Maronites in Lebanon, the day when everybody’s life changed forever in this community.

The rivalry between the two dominating clans, the Al-Ramis and the Al-Semaanis had been lingering since a long time despite the fact that intermarriage between the clans was not rare and that all were Christians of the same denomination. In a church, the conflict that is triggered by political and personal issues, explodes – and in the end 24 men are dead.

Eliyya, the son of one of the victims, comes back to his home town for a visit after having lived for more than twenty years in the United States. He wants to meet his old and nearly blind mother – and to find out who his father – a man whom he has never met – was, and why and how he died. But this is not an investigation that aims in finding a culprit, as the two Armenian photographers suspect that were witnesses of the church massacre and that may or may not have shot photos from the gunfight. For Eliyya it is also an attempt to find out why his mother has sent him away from the small town so early on in his youth, first to school in Beirut and then to study abroad. And what about the rumors that he was conceived after his fathers death?

Eliyya wants to find out where he comes from and why his life in exile is so unhappy and the sense of purpose is drifting away from him because he is for some reason unable to create lasting friendships or relationships with people. He goes to different areas of the town where the two clans live and talks to people who were either witnesses of the events or knew the victims of the massacre intimately. What we read is therefore a mosaic of voices told by different characters.

While reading the book, I realized that some of the traits of the people in the community that the author is describing are typical for many areas in the Mediterranean. The machismo of the small town and its men has a lot in common with what one could find also in Sicily or the Accursed Mountains in Albania for example. An exaggerated pride in traditions and an allegedly prominent lineage (frequently invented), the badmouthing of and gossiping about “the others”, to whom all possible negative characteristics are attributed, the widespread misogyny, the contempt for those who don’t join in the frequent violent skirmishes between the clans, the cult of the gun that plays such a dominating role in this society – it has very little to do with the usual stereotypes (the “bad guys”in this book, if we may call them like this, are all Christians – Muslims are practically absent in this novel) we are used to when we come from a “Western” country.

The author got the inspiration to this novel from a murder in his home town, and he goes to great length to present us a multi-faceted story; the complicated relationship between the people is revealed by the life stories of some of the minor characters, for example the baker who lived during the civil war on the “wrong side” of the town, i.e. surrounded by people from the other clan – being only a baker didn’t protect him in the end. The tailor who takes so much interest in his good looks and his gun. Or the two Armenians, descendants of survivors of the genocide in 1915 whose ancestors found refuge amongst Arabs, but who feel estranged from the community in which they live after the catastrophe in the church. There is Muntaha, a neighbor of Eliyya’s family and the best friend of Kamileh, Eliyya’s mother, who knows a few things that the others don’t know. And there are of course Eliyya’s parents: Yusef, his father, a gambler and womanizer and there is, most importantly Kamileh, Eliyya’s mother who is in a way the real centre of this novel. We get to know her well as readers and we begin to understand that there is also another side to her than that of the constantly bickering, stubborn, and harsh old woman. But as a result of the events she had to go through, she was never able to share this side with her husband or her son or anybody else.

The novel has a very elaborate structure and the author knows obviously exactly about what he is writing. The motives of his characters, as difficult as they seem to be understandable in the beginning, make much more sense while the story moves on. It is also a story of exile – not only Eliyya spends his life abroad, also many of the other characters have been emigrating at least temporarily to some godforsaken place in Brazil, Venezuela or Australia, some of them just coming home in time to become part of the group of men that perished in the church massacre (the “incident”, as it is called by almost everyone).

One of the aspects of this novel that I found most interesting was the author’s analysis of the already mentioned machismo of this very traditional society. It is not only about guns, but also about cars, something to which most of us can relate probably much more easily. The author mentions a rather revealing development – at a certain moment in the late 1950’s, early 1960’s, American cars are getting more and more replaced by German cars:

“…it was tempting to say that they found in German cars a kind of toughness and durability they had missed in the American cars…Mixed in with all of that praise for mechanics was also a general fascination with the German nation for having confronted the whole world by itself in WWII, which was a reason enough for pride, despite its eventual loss.” – (The Falange, the fascist Lebanese party that has as an almost exclusive power and support basis in the Maronite community in Mount Lebanon was never hiding the fact that they were inspired in many respects by the Nazis, SS-like uniforms of their paramilitary militias that are responsible for some of the worst crimes in the Middle East included.)

One of the most interesting paragraphs in the book for me was when the author is explaining how the people were getting used to the sound of the different kinds of gunfire – with the single shot at point blank range being the most chilling since the distance is too short to fail. But there are even absurd cases like those people who are sending a tape with recorded gunfire to a brother in Australia – the poor guy is allegedly living in a place where he is deprived of that sound! That is so grotesque, it is even funny.

“And then there was the unverified claim that Abu Saeed’s neighbours and relatives started shooting into the air one day, refusing to tell the reason for their joy. The secret didn’t come out until days later, thanks to some women who sent out news outside the quarter that Abu Saeed had been experiencing a constant erection and was worried sick about it. He’d consulted numerous doctors and the day it finally ‘slept’ for him, as they say, all his family and neighbours fired their rifles in celebration.”

I couldn’t help but bursting out laughing when I imagined the whole family and neighbourhood celebrating the receding erection of their leader – hilarious!

Jabbour Douaihy, a professor for French literature in Beirut, was a new name to me. I am glad I read this multi-layered and -voiced novel that didn’t only give me a much better insight and understanding in the reasons for the violence in Lebanon and the Middle East in general, but that is also due to the great abilities of the author as a storyteller a book that will stay very long with the reader. It can be also read as a kind of Bildungsroman of its main character, but that is only one of the various approaches to this rich and thoughtful book.

In the end we see Eliyya saying good-bye to Kamileh, and it is very probably the final farewell. On his way back to the United States, Eliyya is getting rid of some excess baggage. That is sometimes very helpful – not only while traveling, but in life in general. 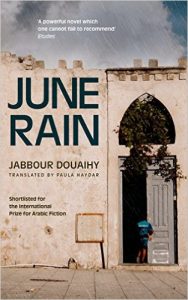