“Once, when I looked out of the window during the Lord’s Prayer instead of looking at the crucifix, my mother hit me in the face, so that the blood was running from my mouth and nose, and I did not get anything to eat and had to kneel on the ground during the meal.” (Als ich einmal beim Vaterunser statt auf das Kruzifix zum Fenster hinaussah, schlug mich die Mutter ins Gesicht, dass mir das Blut zu Mund und Nase herauslief, auch bekam ich nichts zu essen und musste während der Mahlzeit am Boden knien.)

This is a comparatively mild form of physical abuse and violence that Lena Christ, the author of  Erinnerungen einer Überflüssigen (Memoirs of a superfluous woman) had to endure during a big part of her childhood and youth by her mother. Verbal abuse of the most aggressive and malicious form, savage beatings not only by hand but with all kind of instruments at hand that resulted in several hospitalisations and suicide attempts; this is what Lena Christ received from her mother instead of love and care. Even more than a hundred years after the publication of this book, it is difficult and heartbreaking to read these memories of a woman that had to endure so much rage, hatred and violence from her own mother.

Lena grew up at the end of the 19th century in rural Bavaria and had a comparatively carefree early childhood in the home of her grandfather and step-grandmother. The illiterate grandfather, a kind and emotionally supportive person, and also the grandmother who was also taking care of several foster children, gave the young Lena obviously enough space to develop herself. Christ is describing the typical village childhood with pranks of children, village and church festivities, almost idyllic. Like most children, she has a keen eye for what’s going on around her and gives interesting characterisations of villagers she knew and anecdotes from this happy period of her life. The parents of Lena are absent: the father dead – his ship sunk when Lena was two -, the mother in Munich, who turns up only very rarely and who speaks not at all with her daughter when she comes for a short visit.

Lena was born out of wedlock, a so-called illegitimate child. The fate of such children was frequently rather sad. They were – like Lena – seen as a shame, and what is more: a permanent living reminder of this shame. Frequently they were subject to verbal and physical abuse, and had usually a very hard life. But while Lena’s fate may to some degree be considered as typical, the sometimes insane hatred of her mother is extraordinary.

After the first years with the grandparents, Lena’s mother sends a message that will change Lena’s life forever: she has married and from now on, Lena is supposed to live with mother and stepfather in Munich. But while the stepfather, a few years younger than the mother, shows a certain kindness and understanding for Lena on several occasions, the mother knows no limits for her rage directed at Lena, which almost costs the girl’s life. No wonder that she is running away on several occasions. Once, she convinces the bigoted mother to allow her to enter a convict, but also this experience was not a lucky one. (The Catholic church and their representatives had their fair share in Lena’s suffering, and the author mentions on more than one occasion the bigotry of priests and nuns.) Surprisingly, Lena is homesick. And who knows, maybe things have changed at home at least a little bit…but that’s an illusion as she has to learn very soon the hard way.

To avoid a wrong impression here, I should mention that Lena is despite all her bad experiences described as a quick-witted and rather self-confident young person who rules efficiently over the cuisine of the restaurant that her father is managing with growing success. Lena’s family is not poor and well-respected and a growing number of (legitimate) children is also proof for a seemingly “normal” family which is slowly climbing up the social ladder. From a certain age on, Lena attracts also a considerable number of suitors, but when a young man from an allegedly wealthy family proposes to her, she accepts although she doesn’t know the boy; she is just happy to get away from her mother – who not surprisingly curses her in even by her standards very harsh words.

Lena’s marriage is described only in comparatively summarily form: the husband turns out to be a drunkard who is permanently abusing and raping his wife (because as a husband he has legally “the right” to do so…). He is going bankrupt and becomes mentally insane, and leaves Lena with several children alone and homeless. Lena finds a temporary shelter and work as a secretary. With a slightly optimistic note that Lena tries to prove that she is a more than a superfluous, unwanted person, the book ends.

Lena Christ wrote this book in 1911 and published it after she got a very positive feed-back by the author Peter Jerusalem, who read the manuscript. Jerusalem became her second husband. Other Bavarian authors, like Ludwig Thoma and Korfiz Holm encouraged Lena Christ and helped her to find publishers for several volumes of stories and two novels she wrote. But it seems that she was haunted by nightmares and that her childhood abuse by her mother left her soul scarred for life. She left her second husband for a much younger man, started to forge paintings and got in conflict with the law. She committed suicide in 1920, only 38 years old. The cyanide was provided by her estranged husband, who later lived mainly from the royalties of Lena Christ’s writings. It seems that he more than a bit distorted the image of her personality, giving the impression that she was insane. He created a kind of legend and it took a very long time until serious research had a second look at Christ, whose work could as well be considered as an early example of feminist writing in difficult times.

The book has to my knowledge never been translated into English. One reason might be the language. Lena Christ’s book is written in a language very close to the real, spoken language of the people among whom she grew up. The Bavarian dialect that is present on almost all pages of the book may be a real challenge for any translator. But these memoirs have also a tremendous charm; Lena Christ had a great natural talent to tell her story, and the book is not only valuable as a witness of a certain historical period but is also proof that someone with comparatively little knowledge regarding literature can be an excellent author.

Emerenz Meier, Franziska Reventlow, Elisabeth Castonier, Marieluise Fleißer – these are some more remarkable female writers from Bavaria from that period. They should not be forgotten and should be read more frequently. And why not in English translation? 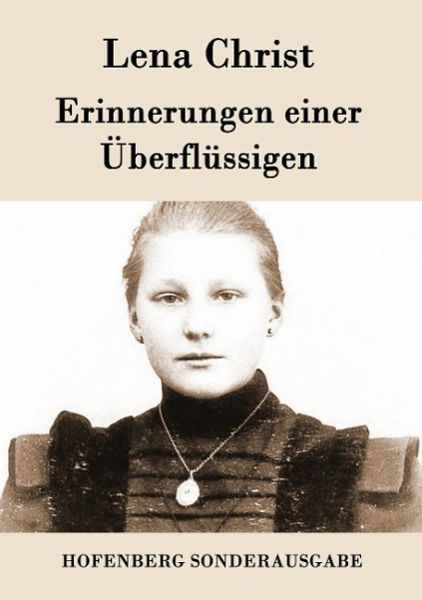 The short quote in the beginning was translated from the German by me.

5 thoughts on “Memoirs of a superfluous woman”