The sturdy and resilient olive tree is the perfect tree for the dry mediterranean climate of a big part of Southern Europe and the Middle East. When you plant an olive tree or a whole olive grove, it will take fifteen to twenty years until the saplings will bear for the first time fruits that are ready to be harvested. Whoever plants an olive grove makes a statement: this is my home and I intend to stay and hand it over one day to the next generation.

Deborah Rohan’s book The Olive Grove tells the story of Kamel Moghrabi, a young Palestinian who grows up in Akka near Haifa, and his family. Kamel is the son of a middle class family which lives since centuries in this town. Young Kamel is enlisted in the Ottoman Army when the story begins: it is the time of the Young Turkish Revolution shortly before WWI. A growing self-consciousness as a nation and the demands of self-governance and independence take root not only in the Balkans, but also in the vast regions of the crumbling Empire that are inhabited by Arabs. Although Kamel is too young to play a big role in this movement, he wholeheartedly supports the ideas of self-governance and independence also for the Arab subjects of the Ottoman Empire.

The book follows Kamel’s story which is rich in rather dramatic situations: imprisonment and threatening execution by the Turks for his alleged participation in a conspiracy, rescue in the last moment by British soldiers, return to his war and cholera affected home with his beloved grandfather and brother having fallen victim to the epidemic. In a very difficult situation at home, Kamel marries his childhood friend Haniya with whom he builds a family and who is to become Kamel’s big source of happiness.

But the big hopes for self-rule and independence are being disappointed. One Empire left, while another Empire established its rule. Now it is the British who are the new masters of Palestine. The tension between the local Arabs and the new rulers is heating up even more by the arrival of Jewish immigrants from Europe. The Moghrabis are finally forced to flee their home and live the lives of refugees. The cherished olive groves, planted by Kamel for his children are lost. When some family members of Kamel come for a short visit to Israel from the US to visit their home town in the late 1990s, no trace of the olive groves has remained.

The book is based on a real story. The Moghrabi family told the story to the author over a long period and she filled in the gaps with additional research about the time and circumstances. The result is a very human and touching story that had me in its grip from the first to the last page.

Rohan depicts Palestinian life in a warm and engaging way. Not only are Kamel and his family interesting and likeable characters, and the love story between Kamel and Haniya at the core of the book is beautiful and heart-warming.

Also many of the other characters have depth and are very interesting, like Kamel’s friend Hagop Unifikian, a young Armenian who is saved by Kamel from unbearable harrassment and probably death while serving in the Ottoman army. Kamel’s courageous action to save this poor boy marks the beginning of a lifelong friendship.

Also Rabbi Moussa, a neighbor and friend of the family is a likeable and colorful character. The rabbi is a benevolent person and well accepted by everyone, be it Muslim, Christian or Jew. He has his own opinions about the Zionists who come from Europe and that bring an element to Palestine which is alien to him. But with violence ravaging more and more between the radicals of both sides, he needs to think about his own security and finally moves away from his Arab neighborhood. The process of the estrangement between him and his Arab friends and neighbors is slow and very painful for both sides.

Most people are very quick to jump to knee-jerk conclusions when it comes to the conflict in the Middle East. What I liked also about this book is that it shows understanding for both sides. It doesn’t offer solutions or cheap political slogans but shows in a nutshell the core of the problems in this region.

I recommend this book to everyone who wants to read an engaging family saga that gives also interesting insights in the history of Palestine and the plight of the people in this region. 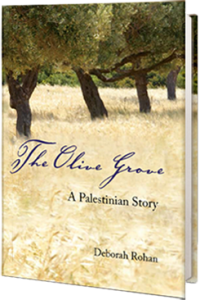 1 thought on “The Olive Grove”