“Kiev, night of 20th-21st May, 1997
Sergeant Voronko of the State Vehicle Inspectorate loved his snug little glass booth on Independence Square in the heart of Kiev, and never more than in the small hours, when Khreshchatik Street was free of traffic, and nipping out for a smoke was to experience a vibrant, blanketing silence very different from the fragile night stillness of his home village.”

But on that particular late evening, things turn out to be very different from usual for Sergeant Voronko. First he gets a call to go urgently to another post due to an emergency there, and when he has almost arrived there with his old Zhiguli car, he gets another call to go back again to his glass booth at Khreshchatik Street because his presence at the other post is no longer needed. When he is arriving back at his usual workplace, a corpse is hanging attached to an advertising balloon. The deceased is not only a distinguished general but also a presidential advisor and the circumstances hint at a crime with a political background. And, strangely enough, one of the general’s thumbs is missing. (At the end of the book we will know why.)

It is clear from the very beginning of the book that this is not an ordinary crime. The general’s connections, his links to the Ukrainian and also Russian Intelligence networks are uncovered step by step by the young investigator lieutenant Viktor Slutsky. Slutsky, and not one of his more experienced colleagues is dealing with the case – maybe someone thinks the rookie Slutsky will get (conveniently for certain people) lost in this complicated, entangled and twisted network of relations between all the players involved; or maybe he can be easily directed by someone who is pulling the strings behind the scenes? Both is very probable, and indeed Slutsky gets permanently calls on his mobile phone by a mysterious voice that is always strangely very well informed and tells the lieutenant what to do next. But when Slutsky meets Refat, a mysterious Tartar who works for the Russian Intelligence, he starts to be for the first time keeping a few secrets from the voice on the phone…

The other main line of the story follows Nik, an ethnic Russian that was recently expelled from Tajikistan with his family. Nik, with a background in police/intelligence work and a sound knowledge of German, is trying to get a job in Ukraine where he was born and where he intends to relocate his family too. Luck seems to be on his side when he is offered a job where exactly his abilities and experiences are needed. But he soon realizes, just like lieutenant Slutsky that he is mainly a pawn in a political chess game. He and Sakhno, the other agent he is joining to do some unclear business – including tossing fish over a garden gate, or carting a parrot around – in not exactly exciting German cities like Koblenz, Euskirchen or Trier, are always told what to do without any explanation – and they are also not supposed to ask too many questions.

It would spoil the fun if I would retell the story here in detail, so I better stop here with the synopsis.

You can read Kurkov’s novel like you would read any fast-paced crime/espionage genre novel. It is a real page-turner and I read it in one evening. There is a lot of action, good dialogues, very credible characters and an interesting story. All ingredients you need to enjoy a book of this genre.

But there is also a second, less obvious layer of the story. Kurkov is a master of intertextuality. The book is full of allusions to other works and writers of the genre but also to Russian literature. Ian Fleming, Eric Ambler, John Le Carre, but also Michail Bulgakov, Ilf & Petrov, Yevgeniy Zamyatin, to name just the few references which I have discovered – and I am sure there are much more in the book. If you are well-read, you will enjoy this book therefore even more.

Additionally, there is a dry humor in many scenes, for example in an early chapter when Slutsky goes home after work to his family:

“Now, up to the eigth floor, and supper. The lift had yet to be installed, a fact for which the tenants, except perhaps the elderly couple on the twelfth floor, were physically the fitter.”

And, although on the surface this is not the main topic of the book, the strained relations between Russia and Ukraine cast already their long shadows over the story:

“RUSSIA AND UKRAINE – NEITHER PEACE NOR WAR? Ran the eye-catching Izvestiya headline. It was a question, it appeared, of determining the frontier, or, more exactly, of the two sides being able to agree where it ran.”

In this novel, things are rarely as they seem to be at a first glance. Even an innocent turtle keeps a dark secret.

Kurkov is a compassionate author. Viktor Slutsky and Nik Tsensky, the two main characters in this book share the same dream: to have a normal life in a decent flat with their families. And when Kurkov is granting almost all surviving characters in the story a happy end, it is like he is winking at us readers. They might be pawns in a political chess game, but they keep their dignity, and as a reward deserve a fairy tale-like ending.

Andrey Kurkov was a new discovery for me: it was the first book by him I read, but it will be definitely not the last. 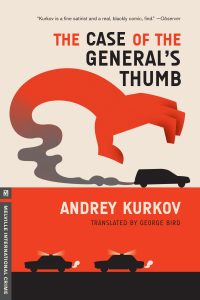