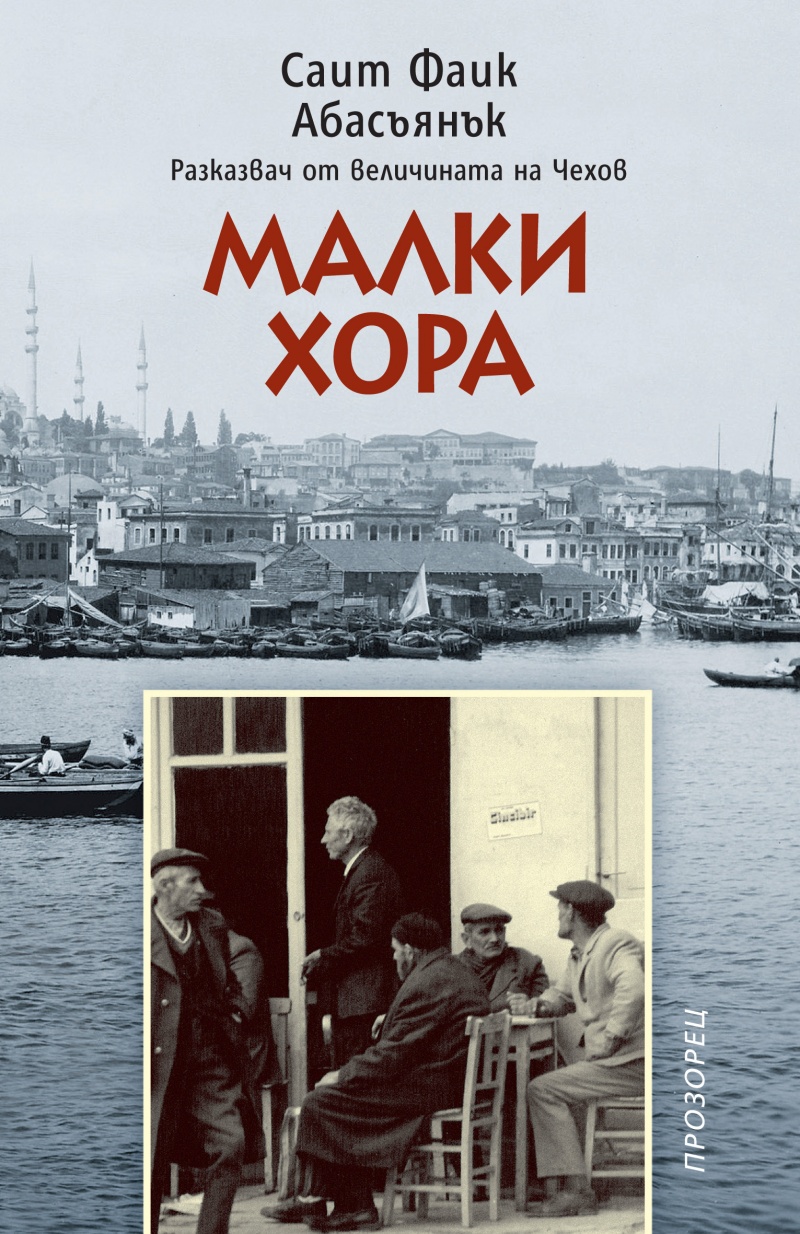 An excellent book by one of my favourite Turkish authors! I am happy that this book is available now also in Bulgarian.

But why does the Bulgarian publisher use three photos on the cover and the back and is not even mentioning the photographer (most probably Ara Güler)? – this is a very bad, disrespectful habit, and it is infringing the moral right of the author of these photographs. Maybe it was an oversight, but in any case I wish publishers in Bulgaria would be more sensitive regarding intellectual property rights and the moral rights of an author. Bulgaria has signed international conventions and is a member state of relevant international bodies – so this is not something that can be treated the way it is in this case and even more outrageous in another case that occurred recently where a big part of the content of a book was copied and re-published without mentioning even the original authors – an obvious act of theft.

It would be good if the Bulgarian Book Association would enforce a Code of Ethics that excludes and penalizes such practices – instead of issuing high penalties to exhibitors on the Book Fair in Sofia that leave their booth on the last day a few minutes before the official closing.

Do you know about similar cases of copyright fraud or lack of acknowledgement of the moral and intellectual property rights of authors in your country?

Sait Faik Abasıyanık: Malki Hora (Саит Фаик Абасъянък: Малки Хора), transl. Kadrie Dzhesur, Prozoretz, Sofia 2015  – a German edition, published by Unionsverlag in 1991 under the title Ein Lastkahn eines Lebens seems to be out of print; there is no English translation according to my knowledge.

As readers we usually are not very much interested in the business or even legal aspects of publishing. We simply take it for granted that we can read books and that there is a functioning book market. But there are some recent developments in the European Union that have a deep impact on the book market and the position of authors and publishers, and in the end also on readers, about which every reader should have at least an idea.

Therefore I intend to devote from time to time some blog posts to important new developments related to copyright law. I feel entitled and equipped to do so because I am not only to a certain extent familiar with the publishing business, but I am also an economist who holds additionally a degree in European Law (LL.M.Eur.) – the topic of my master thesis was “The application of the competition rules of the EEC Treaty on industrial and intellectual property rights” – and I am following new developments of this topic ever since.

A functioning copyright law that protects the rights of the creators of works (and that includes of course also books or other written texts), but also of translators or other people who lawfully own rights – like in many cases the publishers, although their rights are derived, and not original because they are usually ceded by authors for a certain period – is one of the most important pre-conditions for a functioning and thriving cultural life. On the other side, in all societies the copyright has always been limited in one way or the other.

Copyright holders/authors hold the exclusive right to authorise or prohibit the reproduction of their works (books, films, music, etc.), under the 2001 Directive on the harmonisation of certain aspects of copyright and related rights in the information society. The Directive allows member states to make exceptions to this right, for example with private copying. But exceptions are not harmonised across the EU.

The owners of rights cannot forbid so-called private copies but they must be compensated for lost revenue if their works are copied as one of these exceptions. (That a lot of the so-called file sharing is NOT to be considered as private copying goes without saying; what for example the website Chitanka to which I was recently referring sarcastically is doing when it is infringing the rights of authors, translators, and publishers is completely illegal.)

It is common for member states to provide this compensation by levying a tax on electronic hardware that can be used to store copies of cultural works (like blank DVDs, recording equipment, MP3 players, photocopiers, etc.).  These levies amount to approximately 500 million Euro per year within the EU.

While some countries like the UK, Ireland, Malta, Cyprus, and Luxembourg have no private levy collecting system at all, and Greece is not enforcing its system, the development in the rest of Europe has been quite contradictory in the last years.

France, Germany and Belgium for example have been increasing the levies on electronic hardware considerably, Finland and Spain have abolished their levy collecting system completely and have it replaced with a government fund designed to compensate artists for private copying of protected works.

Whether fair compensation for private copying acquired through annual public grants via the State budget is compliant with Article 5(2)(b) of the InfoSoc Directive has still to be decided by the Court of Justice of the European Union (CJEU). This article gives Member States the right to provide a private copy exception to reproductions rights if right holders receive a “fair compensation,” a concept which is, as stated by the CJEU in the so-called Padawan case,

“an autonomous concept of European Union law which must be interpreted uniformly in all the Member States that have introduced a private copying exception.”

A recent case, a law suit between Hewlett-Packard and Reprobel, the Belgian levy collecting society has shed new light on the system of copyright levies in many European countries and has potentially big consequences for authors and publishers – if one can trust the almost collective outcry from the side of publishers’ associations in several European countries.

What was it about?

Hewlett-Packard – and with it probably all members of DIGITALEUROPE, a lobby group and business association that represents the interests of many national associations of the digital industries and many companies from that sector – was taking proceedings against Reprobel in Belgium over the system of copyright levies that were collected in Belgium.  Because some of the disputed issues were related to European Law, the Belgian courts appealed to the CJEU regarding the main question if the levies collecting system in Belgium was in accordance with or against European Law.

The CJEU made it clear that the levies’ collecting system in Belgium is illegal and against European Law. for several reasons.

A major weakness of the system in Belgium was the lacking definition of what is legal and what is illegal copying, and what is to be considered private and what is considered to be commercial use. Reprobel had  increased the levies on multifunctional printers according to how fast they printed. The court rejected this argument and provided that fixing the compensation solely by reference to the speed of the device is incompatible with EU law.

A second reason why the system in Belgium is infringing EU copyright law is the fact that the levies that are collected by Reprobel are shared between the authors and the publishers; according to the CJEU these levies belong exclusively to the owners of the primary copyright, the authors – and publishers have to get no share of it.

A third reason why the system in Belgium is infringing EU copyright law is the fact that the levies collecting society was charging a fixed sum from the sale of a device – in that particular case from a multifunctional printer – as well as a fee based amount on the number of copies of a copyright-protected work. This amounts to a double payment, concluded the CJEU.

As a result, HP won on all accounts, and Reprobel has to revise its levies collecting system completely. Although this case is targeting the situation in Belgium, the levies collecting systems in France, the Netherlands, and Germany are very similar, and the court decision found therefore a very big media echo in those countries, particularly in Germany.

It is interesting that the German Publishers’ Association exclusively focused their public statements on the second aspect of the decision from Luxembourg, condemning it in very harsh words as a serious threat to the flourishing book market in the German-speaking countries. (In Germany publishers receive so far 50% of the collected levies – this system has to be revised now, and publishers in Germany face for 2016 not only a big decrease in their incomes, but are potentially also threatened by claims of authors for the last ten years to receive their share of the copyright levies that was unlawfully distributed to the publishers.)

Indeed, this decision is a serious blow to the existing system. If it is one to one applicable for the situation in other European countries has to be seen. What will be the probable consequences?

If you read the overwhelming majority of media reports, you got the impression that this is all a big victory for the European consumers (they need to pay less for a device with a storage or copying facility in Belgium and other countries with a similar system because the copyright levies are excessive, according to the CJEU), and the authors in Europe (since they get now all collected levies, and not only 50% of it).

But, to give you my two stotinki here, neither the first nor the last claim is true. The big – and probably only – winner here are the members of DIGITALEUROPE.

Who has a little bit insight into the calculation praxis of big international companies like HP will know that the prices for HP multifunctional printers (or any other product in that market by any other producer) will not go down accordingly – but the profits of HP and others will go up in this oligopolistic market. Unless, the CJEU will rule in a few years time that these companies are infringing EU competition law. But this will take time, don’t you worry…

The surprising thing for me was that almost no one who discussed the court ruling had grasped that the authors will not profit even a little bit from this new decision. The cake will not be divided any more between authors and publishers, that’s true, but it will be also considerably smaller than before.

Additionally, publishers will in the future consider their new position when they negotiate contracts with authors. Authors will get (maybe not in all cases, but in the tendency) a reduced authors’ honorary; furthermore, many publishers will think twice if they will proceed with risky projects – when the share they used to get from the copyright levies will not be available any more, many book projects, especially non-commercial one’s will not make sense in the future, and there is a high probability that this will reflect on the number of published titles and the variety of the published books.

Unless, of course, an alternative system is established that compensates authors and possibly publishers for the copied works from a state fund (that is hopefully designed in a way that is considered compatible with EU law by the CJEU.). In a time when less and less files are physically stored on devices but in “the cloud”, this might be sooner or later the only reasonable option.

The CJEU ruling in the case Hewlett-Packard vs. Reprobel is not the only important new development in the field of European copyright law. I will come back to other important news related to that matter in the future.