The novels of Cormac McCarthy are not exactly cheerful, uplifting books – in the contrary! This author is exploring human loneliness and isolation, depravation, and extreme violence in his work. The subject matter that leaves little to no space for any hope, consolation or redemption contrasts with a prose that is sparse but frequently very poetic. As a reader, I therefore feel usually quite wrought out after I finished one of his books, but at the same time I have the impression that I read something very remarkable and even beautiful. Very few authors leave the reader with such contradicting feelings.

My latest try with a McCarthy book was Child of God, his third novel and published before his devastating masterpieces Blood Meridian, All the Pretty Horses, No Country for Old Men, and The Road. And it is again confirming what I said in the above paragraph.

Lester Ballard, the main character, grows up in a small town in East Tennessee (the region in which McCarthy grew up) in the 1960s. Although his family seems to have lived in the area for generations – his grandfather was obviously a local Ku Klux Klan leader, and his father committed suicide by hanging himself – the boy is socially rather isolated. Already during his childhood he shows a violent, sociopathic behavior. After he loses his small farm and serving a prison sentence because he is threatening potential buyers of his former property with his rifle, he returns to his home region. He starts to live as a squatter in a dilapidated cabin, lives on stolen corn or squirrels and other prey he is shooting, and is considered as at least half crazy by the people in his home town.

Ballard is shown as practically unable to lead a normal conversation or to interact adequately with others. A conversation between Ballard and a smith who is sharpening an old axe for him is almost comical, but it is Ballard’s complete lack of ability to make a normal contact with women, that will have disastrous consequences for him.

The remainder of the book shows how the main character sinks deeper and deeper in isolation, degradation, even perversion. The social degradation and decline corresponds with a moral one and even a physical one: from squatter to cave dweller to prisoner; from voyeur to necrophiliac to serial killer; from healthy young man to mutilated prisoner to dissected corpse – this is the path Lester Ballard is going.  And yet, he is

Although the main character in this book is not a man most of us would be keen to meet, McCarthy is describing him with sympathy and understanding. If Ballard would have ever had a positive experience with others, if he had got as a child at least a little bit human warmth and support, he might very probably never turned out to be the person he became.

McCarthy is also a compassionate storyteller. The men who threaten to lynch the already crippled Ballard if he is not leading them to the corpses of his alleged victims, are full of blood lust and sadistic pleasure in their (self-)righteous endeavor, and as a reader we rejoice probably quite a bit when Ballard succeeds in escaping (temporarily) his tormentors.

The author is using different perspectives – some chapters are told from the viewpoint of neighbors of Ballard – and he is using spoken language for the dialogues which are given without quotation marks, a method that takes a little bit time to get used to as a reader.

What is it with Cormac McCarthy and the women? I cannot recall any remarkable female character in his books (at least the ones I read). Also in Child of God, the women are marginal figures, mainly victims of men. Not that he is particularly misogynistic, but this virtual absence or marginal role of women in his works is rather strange and I have no real explanation for it.

It would be not true to say that I have enjoyed this book. Too unpleasant, violent and full of graphic descriptions of human depravity is this novel. It is not McCarthy’s best book, but still an important step on the way to the mature masterpieces of his later years. 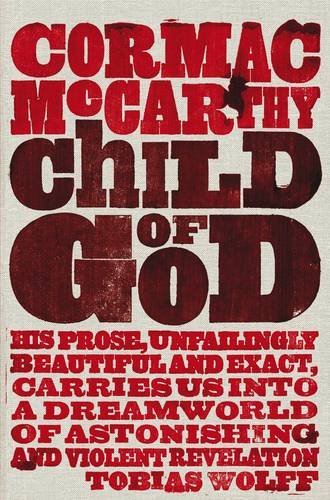