No, the tattooed six-digit number visible on the arm of the narrator’s grandfather is not his phone number as he tells his grandson – it is his inmate number from Auschwitz.

Eduardo Halfon, the narrator/author of The Polish Boxer is a literature professor at a college in Guatemala that seems to be rather frustrated by his job. Year after year he is teaching students that don’t take the slightest interest in literature – but the rare exceptions make up for this disappointment. Juan Kalel, an Indio student is such an exception; he is not only very intelligent and attentive, it turns out that he is also a genuine poet. When he drops out of college all of a sudden, Eduardo wants to find out why…

Later Halfon meets together with his girlfriend a talented classical Serbian/Gypsy pianist at a festival in Antigua; the pianist sends him later strange postcards from all over the world with rather cryptic messages that deal with the origin, fate, and culture of the Gypsy people and especially with their music. Without remarking it first, the narrator gets more and more drawn into the Gypsy music and once the postcards suddenly come to a stop, he travels to Belgrade to find out what happened to Rakic, the pianist who was an outsider in the Serbian and the Gypsy society as well.

And there is the story of Halfon’s grandfather, who survived Auschwitz thanks to the help of a Polish Boxer – that’s what he tells Eduardo, although when a TV crew interviews him about his concentration camp survival, he tells them that he survived exclusively due to his skills as a carpenter. The classical unreliable narrator.

These three stories plus a few smaller ones are interwoven in Eduardo Halfon’s novel. While it starts like a classical campus novel in which a literature professor is talking about different authors and his concept of literature, later visiting an interdisciplinary Mark Twain conference in the United States, the focus shifts completely to questions of identity when he meets the pianist Rakic, who is rejecting his Serbian heritage and wants to become a Gypsy (since he is of mixed origin, he is shunned by both communities). The author/narrator, a Jew that rejects his Jewish heritage (“I have retired from being Jewish”, he says somewhere) is probably attracted to Rakic’s story so much because Rakic, just like him wants to get rid of a part of his heritage in order to become someone else – but that is of course not possible.

The chapter about the Indio poet would make in my opinion a great stand-alone short story. But since Kalel is dropped and never again mentioned during the rest of the book, I was wondering why his story was included in the novel. The same goes even for the story of the Polish Boxer, since the main character in the book (beside the author) is neither the Polish Boxer nor the grandfather, it is the enigmatic pianist. Halfon can write and many pages are really gripping, but as a novel, the book disappointed me a bit.

My impression of The Polish Boxer is mixed: an interesting author and a text that makes curious to read more by Halfon. As a novel it is for me not very satisfactory. The different parts and story lines fall not always in place, and even the title is a bit odd since we learn next to nothing about The Polish Boxer except the few remarks of the grandfather, a seemingly unreliable storyteller. Maybe we have to wait for Halfon’s next book – I read somewhere that he is working on a follow-up novel to The Polish Boxer – and then maybe some of my questions will be answered, who knows.

A few minor mistakes (like Nejgoš instead of Njegoš) could be easily fixed in  a new edition. 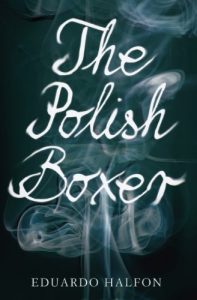