That people are leaving their home countries because they want to find a better life somewhere else is a phenomenon that is probably as old as mankind itself. But to me it seems that the extent and speed of this migration has increased a lot in the 20th and 21st centuries beyond anything experienced before.

Apart from the increase of the number of migrants, there is something else that puzzles me about this development: the cynicism and application of double standards towards migrants. While those of “us” westerners who work for some time or permanently abroad (like the writer of these lines) are usually labeled “expatriates”, the words that are used to characterize someone who for good reasons is looking for work in a wealthy country of the West are “economic migrant”, “poverty migrant”, “illegal immigrant”, “asylum shopper” – and these are still the more friendly terms.

When during the existence of the Iron Curtain migration from Eastern Europe was extremely limited, and those who tried to flee were leaving their countries in very dangerous circumstances, these migrants were branded as heroes and freedom fighters who wanted to leave behind a terrible communist dictatorship; now when the same people leave their places for the same reason – an unbearable situation for themselves and their families – they are usually downgraded linguistically a lot.

And those who flee by boat via the Mediterranean to Europe, or to Australia via the Indian Ocean: they all could be saved, but better let them drown so that less of “them” cause “us” any trouble…Welcome to the world of hypocrisy! – the same world that doesn’t give a damn about the civilians and children that fall victim to the drone assassinations of the “West” and starts a discussion about the moral implications of this extra-legal killings on a large scale only in that moment when some of the victims happen by chance to be one of “us” (i.e. Christians from Western countries).

Forced migration, ethnic cleansing, the attempt to cross borders in search for a better life, and the situation of exile in general are important topics of the literature of the last decades. The story Men in the Sun by the Palestinian author Ghassan Kanafani is a classic in this respect.

Three Palestinian men that lost their homes in Palestine during the events of 1947/48 (the Naqba, or catastrophe, as it is called by the victims) are in the center of the story. They lead a rather miserable life without any perspective in the huge refugee camps in Jordan, Iraq and other Arab countries. (As an aside: also the Arab countries apply double standards; while “the Palestinians” are usually considered the victims of Zionism/Imperialism, most of the real Palestinians are less welcome by these countries and still live in refugee camps, decades after their eviction. Only Jordan granted the majority of them citizen rights.)

Kuwait, in the early 1960s developing its oil industry, was in this moment for many of these men a kind of Promised Land. Once you made it there (illegally), you had – with a little bit of luck, connections and backshish – a chance to get an employment based on a temporary contract. A unique opportunity to support your beloved one’s in the refugee camps, pay for a decent education for your siblings, or prepare to get married.

Basra in Iraq was at that time the place from which many small groups left to make their way past the border guards through the desert. Smuggling refugees was (and is) a very profitable business, and so we witness our three main characters looking for an affordable and reliable guide.

Kanafani made a very good decision to introduce each of the three men, their background and their way of thinking, their different character and outlook on life in a separate chapter.

There is Abu Quais, the oldest of the group. A farmer by profession, who is missing his olive trees in Palestine and who hopes to make enough money in Kuwait to be able to buy saplings for a new olive grove somewhere. In his fatalistic, a bit stubborn way he seems very characteristic for the Palestinian peasant, or the peasant in general.

Then there is young Marwan, who stands up to the financial demands of a particular unpleasant businessmen who insists on a high advance payment and no guarantee for success for the undertaking. Marwan quickly emerges as the unofficial leader of the small group, and we can almost be sure that with his energy and optimism, he can be very successful in Kuwait – if he gets there at all of course.

And then there is the good-hearted, naive Assad. After his brother stopped to send money from Kuwait (he got married and supports his own small family now), he had to stop his studies and tries to get now also to Kuwait.

And there is of course the guide, Abul Khiazuran, who promises to smuggle them in the water tank of his truck through the border checkpoints. If only it wouldn’t be so terribly hot in the empty water tank – but it will be ok, if they don’t have to wait very long at the checkpoints. Otherwise…

For the reader it is not a surprise that this journey ends in a disaster. When the driver pulls out the bodies of the three men after the border crossing, he – like the reader – is asking himself a startling question:

What struck me also about this story was the deep symbolism of the fact that the bodies are deposed at a garbage dump; this is how much a refugee’s life is worth. And also the fact that the driver lost his manhood literally as a result of his fight with the Israelis, and is now interested in only one thing: money is of course also charged with a symbolic meaning.

One more thing: there are no antisemitic slurs in any of Kanafani’s stories of this collection of stories. Sure, the Jews/Israelis are the enemies of these people; those who are responsible for the loss of their homes, their miserable lives in the refugee camps, and the loss of many lives too. But the enemy is not a demon, just someone who took away the land and existence of people who have lived in Palestine for hundreds of years.

The other stories in this collection are also very good; I was particular impressed by The Land of Sad Oranges, a short story about a family who is forced to flee their home and escape to Lebanon. The few oranges that they can take with them make them cry; a memory of what they lost and will probably never see again.

Ghassan Kanafani (born 1936) was one of the most talented Arabic prose writers. Born in Palestine, he had to leave his home at the age of 12 and shared many experiences of the people in his stories. He became also a political activist and joined the Popular Front for the Liberation of Palestine of George Habash. Fortunately, his work is not that of a political propagandist; it shows the suffering of the people of Palestine, and asks for empathy from its readers, not for agreement with a political program.

Kanafani was killed by a car-bomb explosion in 1972 in Beirut, together with his niece. Nowadays the assassination would have been executed by a drone. I suppose some people may call that “progress”. 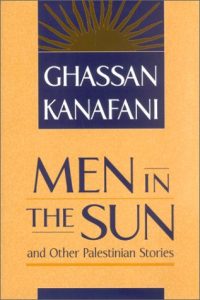