Alexandria, the second biggest Egyptian city, has been for most of its history a truly cosmopolitan Mediterranean city. From the time of its foundation by Alexander the Great until the Suez crisis Alexandria housed not only a big Greek community, but also people from all possible different ethnic, national and religious background. When you would walk on the streets of Alexandria one hundred years ago, you would probably hear people on the streets talking to each other in about a dozen different languages.

Alexandria was not paradise, but it was a place where during most of its history, its inhabitants – no matter what their origin was – had learned to get along with each other. (For those who are interested in the history of Alexandria and the other multi-ethnic cities of the Mediterranean Beirut, Smyrna and Saloniki, I would like to recommend a book by the British historian Philip Mansel: Levant: Splendour and Catastrophe on the Mediterranean, London 2010)

It is therefore easy to understand that Alexandria was and still is a place that inspired the imagination of many writers. The Greek poet Constantin Cavafy spent most of his rather uneventful life in this city and created his poetry here. E.M. Forster devoted two of his works to the city (Alexandria: A History and a Guide and Pharos and Pharillon). His friend Lawrence Durrell used Alexandria as a backdrop of his Alexandria Quartet, a series of four novels. Also several Egyptian (Arabic) authors have made Alexandria the location of some of their most important works, e.g. Naguib Mahfouz’ novel Miramar.

And there is of course a rich autobiographic literature and memoirs of people who have lived in Alexandria, such as the beautiful Out of Egypt, by Andre Aciman, or George Moustaki’s Les Filles de la mémoire (Moustaki’s father owned an antiquarian bookstore in Alexandria).

The collection of short stories Farewell to Alexandria, by Harry E. Tzalas fits into this context. Tzalas, born and educated in Alexandria, emigrated to Brazil in 1956 before settling in Greece where he became the founder and president of the Hellenic Institute for Ancient and Medieval Alexandrian Studies in Athens, a position that brought him frequently back to the city of his youth.

The eleven short stories, written between the late 1970s and the early 1990s, explore the Alexandria of the late 1930s, through WWII, the 1952 revolution and the Suez crisis that ended with the almost complete dispersal of the non-Arabic population of Alexandria.

The characters in Tzala’s stories are taken mainly from his childhood and youth. They come from different social milieus and different religions and are described with great warmth, sensitivity and perception.

There is for example Antoun, a poor Lebanese shoemaker, a simple but good man. One day, a relative of Antoun dies in Beirut, and the hero of the story inherits a modest amount of money. Now the quiet life of work and weekend fishing excursions of Antoun comes to a halt for some time. Should he start his own business now that he has the opportunity and the funds to do so? Should he invest the money somewhere else? What to do with this sudden modest wealth? Antoun doesn’t sleep well for a while until he comes to the probably wise decision to spend the money for the fulfillment of a long existing secret wish: he always wanted a watch! Once he makes up his mind, he goes ahead without further hesitation – he buys watches for all family members and a little radio. And leads his life from that moment on just as if nothing has happened. Not a very exciting or wealthy life, but probably a quite happy one. At least he rose to the status of a watch owner, and that’s probably as far as the ambition of Antoun would lead him. The story ends with a short afterword:

The years passed. I left Alexandria. Osta Antoun died. I got the news when I met an old acquaintance who used to go fishing with us on Sundays. “Antoun passed on,” he said. “May God have mercy on his soul. He was a good man. It was his heart, you know. He was buried holding his watch tightly in his hands.”

Many of the characters in Tzalas’ stories are waiting for something to happen, like the Armenian family in The little Armenian girl that is waiting for the ship to bring them home. But frequently, the expected is not happening, or when it comes finally, something important has changed in the meantime. Life is taking its own course and we are usually not the masters of our destinies.

Some of the stories are particularly moving because they show the fate of families that are stranded in a hostile surrounding during WWII. The front line was not very far away from Alexandria, and the authorities (and some neighbors) were not particularly friendly to the number of Italian or German families that resided in Alexandria. That some of them showed open support and sympathy with the enemy didn’t exactly help to make their lives easier. Frau Grete and Sidi Bishr, October 1942 deals with this aspect, but the stories are never dry history lessons. They always put the spot light on some very interesting and credible characters.

Tzalas’ book breathes a certain melancholy. Because it describes a lost Utopia. But it is thanks to stories like the one’s that Tzalas is telling us, that this Utopia is kept alive at least in our memories:

Alexandria is resurrected for all those who called her Utopia, who have loved her and lost her; the Alexandria of children and poets. (from: Alexandria ad Aegyptum)

The book is illustrated by Anna Boghiguian, an Armenian-Egyptian artist. The illustrations are very evocative and add to the charm of this beautiful collection of stories. 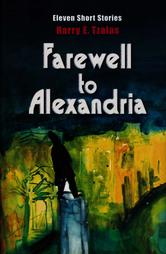