The Books Murderer (Der Büchermörder) by Detlef Opitz is a novel that is remarkable for various reasons. It is an extremely well-researched historical novel; it is a novel that tries to resolve the mystery of a series of crimes – including murder – that are all linked to the insane passion of a priest for books; and it is a novel that uses in a most virtuous way probably all existing writing styles in German language from the 18th to the 21th century.

As an additional interesting element there is a “we”-narrator that takes certain liberties in filling in the gaps that the documents that he uses leave in order to tell us the story of his “hero” – and who this “we” is, a single person or indeed a small group of persons the reader will never know for sure. And even if the “hero” really committed those terrible crimes is not absolutely sure…

I am a quite compulsive book buyer and collector myself, and maybe that’s why I am particularly drawn to novels or stories about obsessive book lovers. That was what made The Name of the Rose so appealing to me, that was why I immediately grabbed The House of Paper by Carlos Maria Dominguez when I saw it in a book store some time ago. Peter Kien and Don Quijote belong of course also in this category of book addicts. I even collect news stories from the media about obsessive book lovers, such as the story of the civil servant from Darmstadt (a city where I worked for a few years) who stole about 25,000 books from libraries – not for pecuniary reasons but because of his wish to own a big library himself.

No wonder I stumbled sooner or later over a quote by Arno Schmidt from his The Stony Heart (Das steinerne Herz):

“I thought for a long time about Magister Tinius, the book addict, who creeps with his hammer through the barren heaths of the Fläming: if others have the money, but he needs the books?!”

Arno Schmidt, a great expert when it comes to obscure German writers of the 18th and 19th century must have been referring to a real, not an invented person, so I thought. And indeed, the “Neue Pitaval” (“New Pitaval”), a very popular collection of real crime stories that was used as source material by many German authors contains a chilling story about a man who had turned from a small protestant Parish priest to a biblio-maniac, and finally to a criminal and murderer as a result of his insane book love.

Johann Georg Tinius (1764-1846) was a priest in a small town in Saxony who had aspirations to be a writer and scholar and who loved books. So far, so good. But somehow things got out of hand and over the years he bought more and more books and had even to rent a barn for his library. People were getting suspicious: how was it possible that a priest with an income that was a mere pittance could acquire such a vast and expensive book collection? The good priest may have been the beneficiary of a small inheritance and his wife who died comparatively early (some suspected foul play) came from a family with a small wealth; too bad that at that time financial irregularities regarding the budget of the parish church were also becoming obvious and an investigation started. But somehow the priest was able to pledge for “not guilty” and because the final evidence that he was the reason for the sudden disappearance of a certain sum of money from the coffers of the church was missing, he got away – this time.

After his wife had passed away, Tinius hurried to remarry a wealthy wife. And, you guessed correctly, he started immediately to put his wife’s money (much to her dismay) to a good use, i.e. by buying much more books. After his book collection had reached a number of 50,000 to 60,000, he ran again out of money. And almost at the same time, robberies, and even a murder and an attempted murder happened in which everything hinted at the man in black with the book hobby.

Tinius got arrested and the court proceedings lasted almost ten years. His defence strategy was very simple: “I am innocent”. Nevertheless, the evidence was overwhelming and he got a long prison sentence. He lost everything: his wife divorced him, and – much worse for him – his book collection was auctioned off. Even Goethe bought books from the auction!

Tinius used the time in jail to try to prove his innocence; he wrote a short autobiography which is for sure one of the strangest texts of the 19th century, so utterly inadequate is what Tinius has to say about his book addiction and the crimes he had obviously committed.

After twelve years in prison, Tinius was released because of his old age and poor health. He lived another eleven years in obscurity, some distant relatives had taken care of the man in his last years.

As I said already, Opitz’ novel is not only well researched, it is also extremely well written – but the virtuosity of the language may be a reason why it is untranslated so far. Still, I hope this masterpiece will be available one day also to readers who don’t read German.

The author, and that’s a nice irony, had collected a huge library himself in his younger years – but he lost it all in a game of poker. (And if it’s not true, it’s at least well invented.) 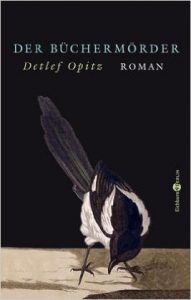 Translation of the Arno Schmidt quote by Thomas Hübner