He had many enemies, and so it seems not surprising that mobster Engin got stabbed on New Year’s Eve on the streets of Istanbul’s dodgy Tarlabaşı neighbourhood in the Beyoğlu (formerly known as Pera) district.

A street war seems to be going on between two local gangsters, ‘Dice’ Ihsan and Black Nizam, whose right-hand man Engin was. But it is not only a fight about the predominance in the (illegal) gambling business – to which some corrupt local policemen turn a blind eye for reasons we can easily guess – there is a much wider area of possible motives and suspects, as Chief Inspector Nevzat and his two assistants Ali and Zeynep find out soon.

Ihsan and Nizam were in love with the same woman, Cilem, and there are rumors that also Engin, who had the reputation of a womanizer, had a relationship with Cilem. Jealousy might be a very strong motif for the murder, but it turns out that Engin also secretly bought some houses in Tarlabaşı with the aim to demolish them and turn the locations in profitable big housing projects (which would have interfered with the intentions of his employer).

The deeper the Chief Inspector and his constantly bickering assistants dig into the case, the more questions come up: what did the street kids that were present on the crime scene really see? Has the giant Suleyman, a once powerful pimp, something to do with the murder (since he has great skills when it comes to using a knife in a fight)? Is Swank Cemal, the inspector’s old friend (and a former mobster himself) trying to mislead the police intentionally? What exactly is the role of Nazli, a lady from a wealthy family who is running a cultural center in the area and who is very strongly opposed to the plans of the local mafia? Are some radical members of the Gezi Park Resistance groups that were fighting against the plans to turn the last remaining park in Beyoğlu into a shopping mall, behind the murder? And why is this rather annoying crime novelist turning up every time when the Chief Inspector is least expecting it? What about the Italian mafia that was also after Engin? And what about the Bulgarian connection that seems to become more important as the story advances? Things are heating up more and more, and Engin will not be the only victim…

Ahmet Ümit, the author of When Pera Trees Whisper, is one of the most successful contemporary Turkish writers. This crime novel is a good example for his skillful handling of this genre. An interesting story, fast dialogues, characters that are described in a way that seems to be taken directly from reality, plenty of local flair for Istanbul connaisseurs, and all is set against the backdrop of contemporary Turkey, with its fast development but also its social and political problems that from time to time explode, as the Gezi Park Resistance has reminded us recently.

When Pera Trees Whisper is a real page turner and especially recommended for all readers that know (or want to get to know) the fascinating city of Istanbul. 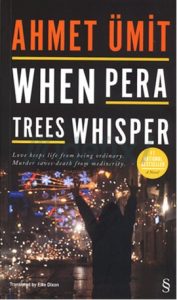