After a long hiatus, I read these days my first Hemingway book since many years: Fiesta – The Sun Also Rises.

We all know – or we think to know – Ernest Hemingway, even if we had not read any of his books; of all 20th century authors, he was arguably the most successful in creating a worldwide public image of himself, the brand “Hemingway”: a manly man keeping himself busy doing manly things (or things he thought were proof of his manliness). And when he was not busy hunting the biggest game, fishing the biggest fish, fighting the most dangerous bull, reporting from the most dangerous war front lines, downing the biggest amount of booze or courting the most attractive women (all the things you seem to have to do when you want to keep a show of being a manly man), he was hammering in a creative outburst with great energy all these outstanding manly novels and stories written in his trademark manly style into his typewriter, preferably stripped down to the waist and with a hard drink and a photographer at hand to distribute this image of the most manly author on earth and his hairy chest to all his readers and non-readers.

Many authors are a bit weird, or have issues, and some of the most talented writers were outright lunatics. So I am not holding this image and ridiculous and narcissistic show of manliness of the person Hemingway against his writing. A book is very frequently more perfect, even more intelligent than its author. We should never judge a book or any other piece of art based on personal sympathy or antipathy for the creator of this artwork. But in some cases, the defaults and flaws of the author show also in the artwork, and then the personality of the author becomes an issue. Fiesta – The Sun Also Rises is in my opinion such a case.

Some American and British expats, mostly wealthy heirs or people with artistic ambitions, mingle in the Paris of the mid 1920s. Life is pretty cheap after the war and Paris is a permissive city with a famous nightlife that made it so attractive for foreigners with hard currency. Paris was the place to be when you were a young heterosexual writer or journalist or when you were just looking for fun (Babylon Berlin was the obvious choice for the less mainstream-oriented faction).

Jake Barnes, the narrator, is a young journalist. His friend, the writer Robert Cohn, starts a relationship with the attractive and promiscuous heiress Lady Brett (two times divorced and planning another rich marriage) with whom also Barnes is in love.

Barnes, who was a soldier at the Italian front in WWI got seriously wounded and as a result is emasculated. Brett seems to love him nevertheless, but since her appetite cannot be fulfilled by Barnes, she starts a relationship with Cohn, and later in Spain where the group is traveling together with some other friends, Bill Gorton and Brett’s fiance Mike Campell, to watch a bullfight, she is seducing a very young bullfighter, Romero.

During the fiesta, the whole group gets drunk and starts to attack Cohn with anti-Semitic remarks. Cohn, who used to be an amateur boxer in college starts a fistfight and is beating up his opponents. After everyone is sober again, the group is quickly dispersing. Barnes receives a message from Lady Brett to come to Madrid, where she had gone with Romero. He finds her penniless in a cheap hotel. She is informing Jake that she intends to return to her fiance.

A quite interesting scenario I have to admit. The chapters are short. The sentences are very short. The book is a very fast read. In some scenes Hemingway shows that his craftsmanship can be excellent, especially when he describes the fiesta, the bullfight that he loved (and that I detest) so much. The book gives in some good moments a clear idea why Hemingway is such a highly revered author in the opinion of many readers.

And yet, I had more than one moment while I read the book, when I got so angry with Hemingway’s writing that I threw the book in disgust at the wall of my room.

As I mentioned, the book consists mainly of very short, childlike sentences. Subject-predicate-object. Subject-predicate-object. Subject-predicate-object. And so on and on, over pages and pages. I simply don’t like it. It does not have to be always the long and winding sentences of a Thomas Mann novel, but there is a thing called syntax and from time to time it would be just nice if the author would give us some sentences that are not written in this childlike style. “Do you have emotions? Strangle them.” This ironic Saul Bellow word about Hemingway’s style sounds very convincing to me after I read Fiesta.  In short, when I read a book labeled “novel”, I want indeed read a novel and not a text that reads more like a film script most of the time, even when the author is the manly Hemingway.

Jake Barnes is not the most endearing narrator. Already on the first two pages he does everything to depict Cohn – who he claims is his friend – in the most disgusting and unsympathetic way.  And even more, Barnes is using the most primitive anti-Semitic stereotype when it comes to paint Cohn in the most negative color. Describing Cohn’s talent for boxing, Barnes tells us (in one of the early passages before Hemingway falls back to his favorite style):

“He was really very fast. He was so good that Spider promptly overmatched him and got his nose permanently flattened. This increased Cohn’s distaste for boxing, but it gave him a certain satisfaction of some strange sort, and it certainly improved his nose.”

Ah yes, Jews have crooked noses, hahaha – maybe in Hemingway’s eyes that was funny, but I find it only revolting. Similarly disgusting, or even worse are the insults that are thrown at Cohn during the fiesta by the others.

The same goes also for the image of women in the book. Lady Brett, although obviously a really attractive woman, is described as a very promiscuous but also cunning and calculating woman. She takes the men she wants, but she is marrying of course only for the money and wealth that it provides. All this talk about love and feelings is just talk, and her attraction to Barnes may be so strong because she knows she can never have him; the curiosity factor, you know. Barnes is a man only in appearance, but contrary to Cohn, Romero, and all the others, he is physically unable to satisfy her. The other women in the book, for example the French girl Georgette, are called poulet (chicken), and they are ready for the men’s consumption – IF you are a real man that is. I think the misogyny of the narrator is beyond question.

This mix of anti-Semitic and misogynistic stereotypes, together with the display of narcissism and self-pity of the narrator got on my nerves. It got on my nerves to an extent that I had to force myself to finish this repelling book.

OK, we should not necessarily identify the views of the narrator with the views of the author. Frequently authors put an unreliable narrator in charge or even one with whose opinions they completely disagree. But considering the autobiographical background of the story, we can dismiss this idea in this case.

Unfortunately this is a book written by a young author in Paris who was wounded in WWI, who drank his time away, got involved in the love triangle he describes in the novel. Hemingway’s affair and the story of the book are (almost) identical – with the important difference that Hemingway was emasculated by his alcohol abuse in later years, and not by a WWI wound.  Hemingway’s main rival was Harold Loeb, a Jewish author and journalist, who was obviously not only the better boxer than Hemingway in real life, but also the better lover. As a reader we can feel, that Hemingway’s and Barnes’ opinions regarding Jews, women, boxing, bullfighting, and a lot of other things are identical. And it is not good when an author writes a book that is “too close to home.”

Spiteful, misogynistic and full of anti-Semitic stereotypes, written in a childlike style. That is Fiesta, by Ernest Hemingway. I know that’s a harsh verdict but I am here to give you my honest opinion for what it’s worth.

I am afraid the next manly Hemingway book has to wait for a long time to be read and reviewed by me.

P.S.: As for stereotypes, I almost forgot it – but it adds to the bleak picture; Hemingway’s characters (much as the author himself, as we know from his letters) have also strong opinions about non-whites. The infamous N word is used exclusively to characterize black people, who in general have no individual name.

Examples: an Afro-American jazz musician is described like this by the narrator:

Yes, just like Jews have crooked noses, blacks are “niggers”, cannot speak proper English and have thick lips and shiny teeth in Hemingway’s world. But it gets even worse when the narrator meets a friend who was placing a bet on a black boxer in Vienna:

‘Remember something about a prize-fight. Enormous Vienna prize-fight. Had a n(…) in it. Remember n(…) perfectly.’ ‘Go on.’ ‘Wonderful n(…). Looked like Tiger Flowers, only four times as big. All of a sudden everybody started to throw things. Not me. N(…)’d just knocked local boy down. N(…) put up his glove. Wanted to make a speech. Then the local boy hit him. Then he knocked white boy cold. Then everybody commenced to throw chairs. N(…) went home with us in our car.’

And so on. Fifteen times the N word on less than one page. I don’t want to be politically correct but Hemingway’s characters in this book are without exception extremely racist, shallow and uninteresting people. Why do I have to follow this story of a bunch of drunkards that are described without any depth in a staccato language that makes every dialogue from a soap opera in comparison sound like high literature? Just because his characters share the author’s own unsupportable opinions about race, Jews, drinking, women and bullfighting?

Thanks, but no, thank you. 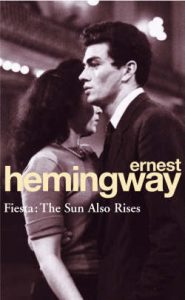