Let’s start with the title. Raw Material is a correct translation of the German word Rohstoff. But Stoff means in German not only material, it is also a slang word for illegal drugs (dope) such as heroin or in this case raw opium.

The story of Jörg Fauser’s novel starts in Istanbul in the second half of the 1960s. The narrator – although it is a novel we may assume that the book is Fauser’s own life story – is living in the (then) run-down Cağaloğlu district, a bit north of the Blue Mosque.

During the 1960s, Istanbul and here more specifically the neighborhoods of Tophane and Cağaloğlu, were favorite hang-out places for all kind of Western young people: would-be writers and painters, drug addicts, petty criminals, political radicals plotting for a somehow diffuse revolution to come, hippies, beatniks. Together with Ede, a painter friend from Stuttgart, the protagonist, a young man with the strong ambition to become a writer, is sharing a tin structure on the roof of a dubious hotel. Life is cheap and so are the drugs. In an odd way a kind of idyll, even during the cold Istanbul winter:

“One poured some gasoline on the stone floor and lit it, and as long as the flames were giving off some warmth, the other looked for a vein. We took everything we could get, primarily it was raw opium, which we cooked, Nembutal for dozing off and all sorts of uppers to get going. When we were going, we had to get more dope and everything else we needed – we lived predominantly on tea and sweets – and then we lay there, wrapped in our blankets, played with the cat and worked. Ede painted, and I wrote.”

The reader is a bit concerned about the fate of this hero. Chances seem to be rather small that he will not end like so many drug addicts. But his genuine passion for writing and not so much the drugs (which he is replacing mainly by alcohol during the course of the story) keep him going and after his return and the start of a relationship with a girl, his life takes a turn, kind of.

In order to support himself, he is writing articles for a number of mostly short-lived magazines that are popular among young people in Germany. He has an opportunity to travel, even to conduct an interview with the famous beat poet William S. Burroughs. The story of the Burroughs interview is hilarious. After some friendly small talk at the beginning, Burroughs comes out with the one subject that really interests him: dope.

“What kind of stuff did you take?” “Oh, Opium mainly.” “What – raw opium? You didn’t mainline, intravenously?” ”Yup.” “Young man”, Burroughs said with the hint of a smile. “You must have been completely off your rocker.”

The literary cut-up technique for which Burroughs was famous is only a minor topic of this conversation. Burroughs comes again back to the subject of drug addiction, and how he was cured from it with the help of a new, but very strange method called the Apomorphine Formula.

“He disappeared into the next room, came back a second later and handed me a magazine-sized brochure wrapped in brown paper: William S. Burroughs: APO-33 Bulletin. The subtitle read: A Report on the Synthesis of the Apomorphine Formula.

“You can keep it”, he said. “My small contribution to healthcare,” and laughed; his choppy ha-ha-ha came from rather shadowy regions. “The apomorphine formula,” he said and sat down, “is a contribution to the cleansing and detoxification of the planet. Detoxification from what? From illness, addiction, ignorance, prejudice and stupidity. The question is: Are the people now in power interested in this detoxification? You know, young man, what the answer is to that.”

The strangeness and obvious paranoia of Burroughs were maybe never described better as in the last paragraph I quoted above.

In the second half of the story, the protagonist moves to Berlin, later to Frankfurt, starting to embark on a more regular life although he is living in an illegally occupied house. An attempt to work as a part of a film crew fails miserably but gives Fauser again an opportunity to show his self-ironic sense of humor.

As we have the feeling that the hero is a more stable person now, the reader’s attention is probably shifting a bit more to what is going on around our protagonist. Frankfurt in the late 1960s was one of the birth places of the German Student Revolt (and also of the brutal terrorism of the so-called Red Army Faction a.k.a. Baader Meinhof Gang). Fauser’s hero, is living through this time more as an amused spectator than as a real part of that student movement. The fake romanticism and annoying self-congratulation of so many literary or autobiographical books on the student revolt by people who participated in it (or later claimed to have participated in it) is completely missing in Fauser’s novel, and that’s one of it’s many strengths.

Fauser, together with Rolf Dieter Brinkmann, was one of the representatives of the Beat Generation in Germany. But we would not do him justice if we saw him as an epigone of a literary movement that he tried to copy. Fauser had his own voice and style. He was also an experienced journalist, and that is also much to the profit of his works. His stories are written without much fuss or affectation, in a precise, matter-of-fact way, with a lot of self-irony and humor, something that was extremely rare among writers of his time. There is a kind of raw energy about this and the other books of this author which make them very appealing to me. I like Fauser’s books a lot.

Fauser was run over by a truck in 1987, while crossing an Autobahn as a pedestrian in the night after his 43rd birthday. (Rolf Dieter Brinkmann was also run over by a car in 1975.)  Fauser’s work deserves to be discovered. For me one of the best German-language authors.

An English edition of Raw Material will be published in November 2014. 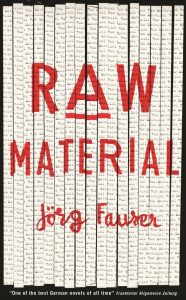 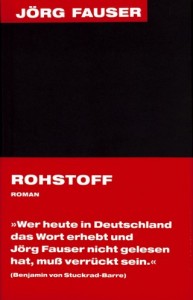 (The quotes in this blog are translated by Marc Svetov. © Berlin Verlag 2009)